Nuru, my cousin – brother since he now refers to me as sister, I like it when he does that since I only had big brothers but now he’s been added to the list as my youngest brother, (okay now back to the story) had just finished his competitions at the Junior Olympics in Boston. On this particular day he made an exemplary performance together with his team mates amongst them my favorite twins; Jaden and Jordan. They scooped the top position making them qualify for the Nationals in Kansas. Our bodies were fully drained as we drove back to our hotel room. We, Aunt Pauline, Nuru and I, had planned on going swimming, but the thought of it was just exhausting. Sleep was quickly calling. We all took a power nap and later that evening drove into the city, our Jamaican friend and her son joined us.

The summer mood was in the air. There were plenty of other tourists in the streets. We quickly found a parking spot and started walking along the ocean as we enjoyed the sun rays as it caressed our melanin filled skins.

Soon  we found ourselves in Boston’s first neighborhood, the North End which I later found out evolved from an isolated village to the home of American Revolutionists to Irish haven and finally to Little Italy. It had a range of old beautiful catholic churches.

As we walked down the restaurants and patisseries lined on the narrow cobblestone streets of Boston’s Little Italy, my stomach got filled with excitement. The faint meaty smell of bacon, dominoes unique dough cooked through smells like a bakery, the gooey creamy smell of cheese, and the zesty smell of pepperoni. All together they brought a taste of heaven.  Being new in town we were not quite picky on the restaurants. We ordered regular pizza, my cousin doesn’t do cheese, it was off the list.

Once at the table, all I saw was a transparent cloud of steam rise up and fade away. The steam was like fireworks at the beginning of a show.

The variety of pizza slices were topped with a generous amount of juicy, succulent ingredients. I reached for a slice and felt the heat radiate through my hand. I saw the amazement in Nuru’s eyes when he  pressed down a little too hard on the pizza and 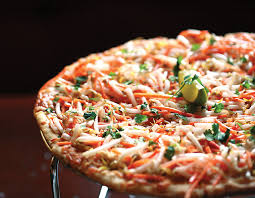 felt a crunch under his fingers he tore that piece apart. You could smell the pizza was fresh from the oven as I could hear the sizzling of meat and the rough sound on the bottom of the pizza making for a great devouring grip. It was nearly silent when I chewed but I could still hear the juicy sounds swishing in my mouth.

There was pin drop silence as everyone’s taste buds were filled with pleasure. A few minutes later the kids’ mouths were all covered in oil. They could have no more nonetheless satisfaction was written all over their faces. As it was a norm they both rushed to the restroom before we left the restaurant. We walked down the narrow lit streets. There was a jolly atmosphere as it was still warm and the street was full of people, mostly couples. Nuru held my hand and we hopped happily down the street.