I tend to believe God works in His own mysterious ways and this was one of them. In less than a month of my stay in Guadeloupe, I received an email from our education office inviting me for a welcoming/training meeting in honor of the first Language Assistants from Kenya that would be taking place in Paris. I was even more excited to find out that my flight and accommodation were being catered for. In addition I got 100euros allowance so as to take a taxi from the airport as I wasn’t well versed with the Paris public transport system.

Packing for the trip was so much fun. I have never had such an easy time packing for a flight, clothes for 3 days including an official outfit for the meeting and a few personal items. My flight was 8hrs long, I left on a Wednesday and my return flight was at midday on Saturday. This was also my first time flying with Air France and I did not like the food, most airplane food is just not interesting but this is a story for another day, because nothing could kill my excitement for Paris.

I got to Paris at around 0700hrs. Once past the passport control, I decided not to take the taxi and use public transport.

I had with me my note book that I had written all my stops including which bus and train would take me to my destination , Centre International d’Etudes Pédagogiques (French: International Center of Pedagogical Studies  (Ciep).  Public transport would be way cheaper and since I was on a 100euro budget, I wanted to make the most of it and also experience the system plus there was no time limit to when I was supposed to report at the Ciep.

Still inside Orly airport, I followed the instructions written on the screens to the gate where my first bus was to be taken. An airport attendant helped me locate the information desk where I purchased the bus ticket as the ticket machines did not take cash. The ticket was about 12euros to my first stop, the train station, Garre Montparnasse. I was so sleepy but couldn’t afford to sleep lest I miss my stop, plus I had to be extra attentive to get what the stop announcer was saying.(Made me miss how I’d sleep in the buses/matatus back home to wake up just before my stop). I got to the train station and everyone was on the move, if not cautious too one could take the wrong train. After asking around,  I found my way to the ticket counter to purchase my train ticket to my next stop, Sèvres-Rive Gauche.  I made sure to sit close to where I could see the destination written on the screens, and they made it easier as they announced it a few seconds before stopping. You should see how happy I was ticking off each stop, now to the bus.

Luckily the bus stop was just outside the train station and one of the bus drivers directed me to the right side on which I should board the bus. This is because before boarding the bus which was the same number as the one I was supposed to board, I asked if it was going to my stop, Parc de Saint-Cloud. It’s always good to ask when not sure. Minutes later, I was walking towards Ciep.

Ps: At this moment I have spent about 15euros as opposed to the taxi which would have costed about 35/40euros.

The Ciep offices or rather building had a nice vintage look, with white/creamish painting. At the reception, I signed against my name, got my name tag and my room key. Yes, it also had guest rooms on the fourth floor. My body was so tired and the jetlag had started kicking in. I took a shower and went outside to look for food. I found a nice Japanese restaurant just by the road and  all I could think of was noodles which were just 4euros. I did not even finish it on one sitting. It was cold outside and my room’s temperature was not  better either, so I sought the comfort of my bed as I sipped the hot tea I had just made. I was planning to rest abit and go see Paris for the better part of the afternoon. My friends, who were also coming for the meeting,  ended up arriving at night, so I spent the rest of the day napping my jetlag, which was actually great because the following day which was the meeting day, I woke up feeling fresh.

It was Friday, I had breakfast and spent a better part of the morning in bed and on my window enjoying the view of the Eiffel Tower, which I had not discovered till late the previous night, then later we went out just to walk around the neighborhood before buying the delicious noodles again for lunch. Ciep was only offering breakfast and accommodation. At 1400hrs all the Kenyan Language Assistants from different corners of France were  gathered for the meeting. There were representatives from the Kenyan Embassy as well and the aim was just to officially welcome us and have a few workshops/training and an interaction sessions with officers from Ciep. This ended with a cocktail at 1700hrs.

Being  my last night in Paris and my 2 friends who were also in this program, already had their friend who was a student in Paris link up with us. He would be our tour guide for the night. We all freshened up charged our phones, had our stomachs full and ready for the night.  Our first stop was the Eiffel Tower and using the bus and train was more effective as it costed a euro or 2 for each ride.  I also enjoyed seeing how the tram just worked in the middle of the streets.

The sight of the Tower was to die for and I think it’s more beautiful at night, having all the lights complementing it. There were other small beautiful monuments close by.

But our focus at the moment was to get to a certain event (can’t remember the name) before 1am to avoid paying the entrance fee haha. So after queuing for like 30minutes, the lady at the entrance allows 3 of us to enter leaving out one of our friend. We decided it was all or none and we Kenyans not conceding defeat decided to go back to the queue but this time tell out friend to add a leather  jacket on top. When we got to the front the lady just noticed, the guys switched clothes hahah.  We did not have a backup plan but we were still full of energy, I know I was.

L’arc de Triomphe was just opposite as well as Champs Élysées , so we walked around for a bit before mother nature started calling. Let me just say the public toilets in Paris are the best I have seen so far, it has an electric door, it cleans itself after someone has used, well stocked with tissue and its free of charge, oh it had a nice mirror too. I am still amazed plus it was very spacious. We wanted to continue walking around but the cold decided otherwise. We ended up getting the bus back, since it was already past 0100hrs and the subway was closed until 5am. I enjoyed the view from the warmth of the bus. I was able to see the Parliament, Notre Dame and Place de la Concorde just to mention a few.

Let’s just say we ended up gate crushing a Halloween Party that we were welcomed warmly. I have never danced nor enjoyed great Moroccan and Tunisian music like I did on this day. The atmosphere was full of positive vibes. We danced the cold night away.

My lovely friends made sure I got back to Ciep safely. (Our tour guide friend actually took me back, eh thank God for good friends). I entered the Ciep building some minutes after 0700hrs and requested the front desk to call me a taxi for 0900hrs. (I did not want to risk using public transport as the train strike that had earlier started was intensifying with several cancelled trips).  I entered my room, packed, took a shower and went down for breakfast. I was ready and waiting by the reception at 0845hrs. I got to the airport, paid 40euros for the taxi leaving me with 20euros from the a hundred that I had budgeted for the trip.

I got to my gate an hour before time and just sat there drowned in the activities of the past night and wondering who said Africans cannot keep time (pun intended). 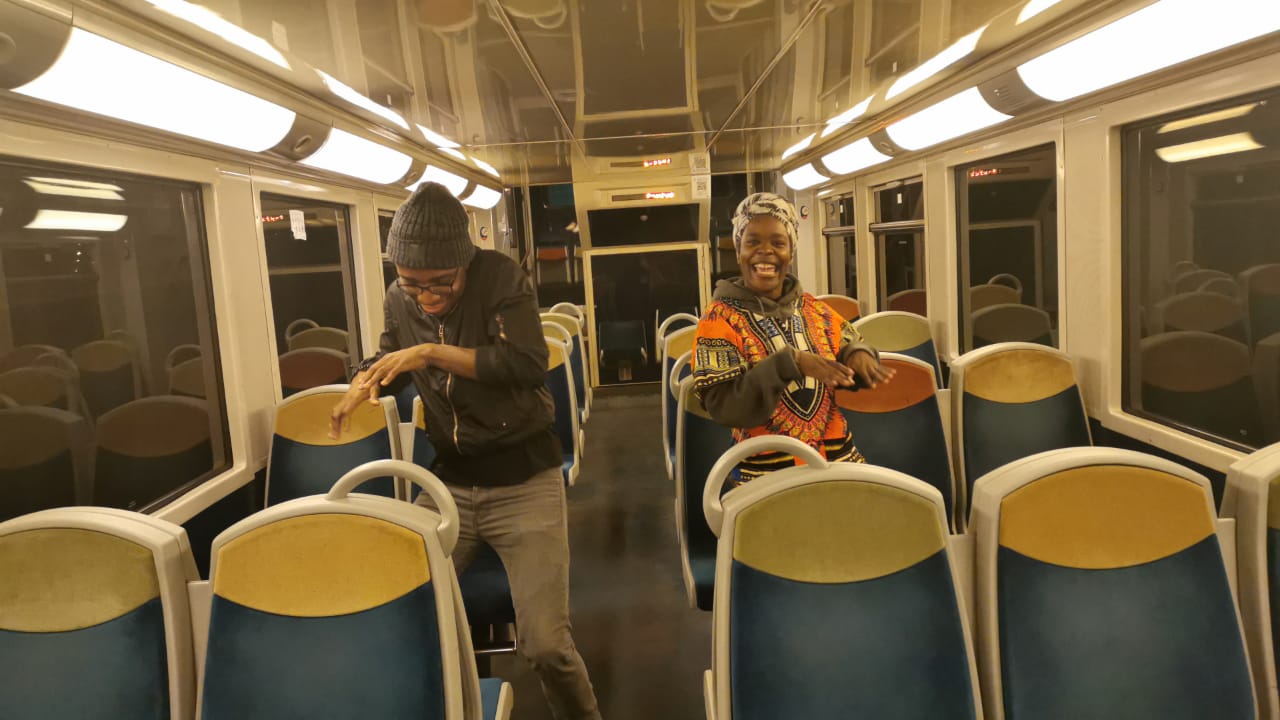 I was happy that I was able to account for every penny spent (that’s what work trips are for anyway J ) and super proud that my dad’s finance/budgeting ‘Ted’ talks paid off ( I know he reads my articles) plus I really enjoyed and had massive fun on my second time in France, you can refer to my first day in Paris; (https://addikahbelinda.wordpress.com/2019/10/21/first-day-in-paris-on-transit-to-guadeloupe/ ) 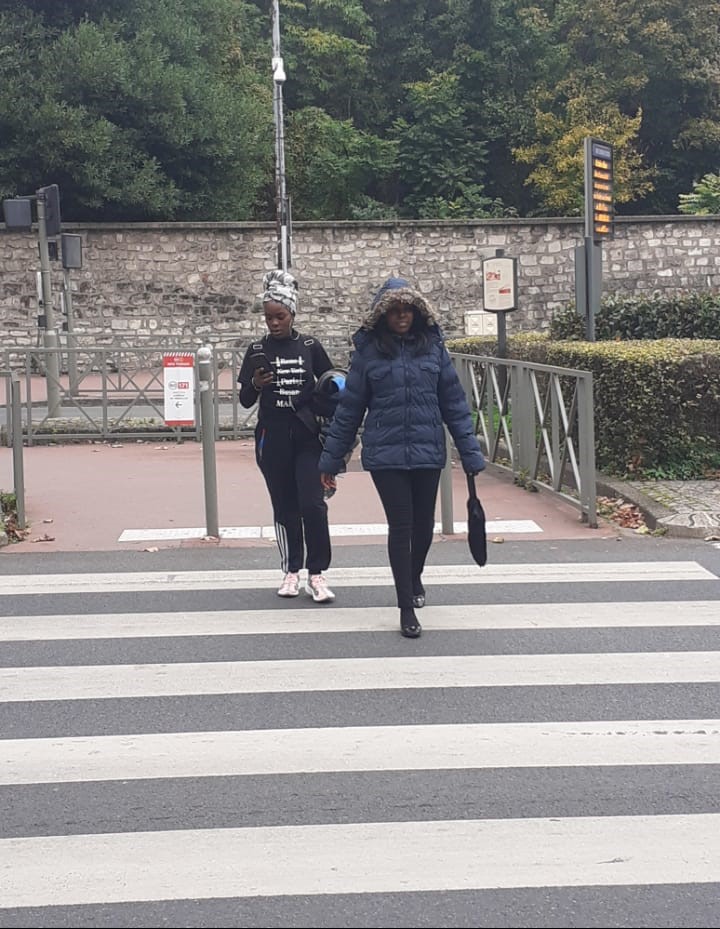